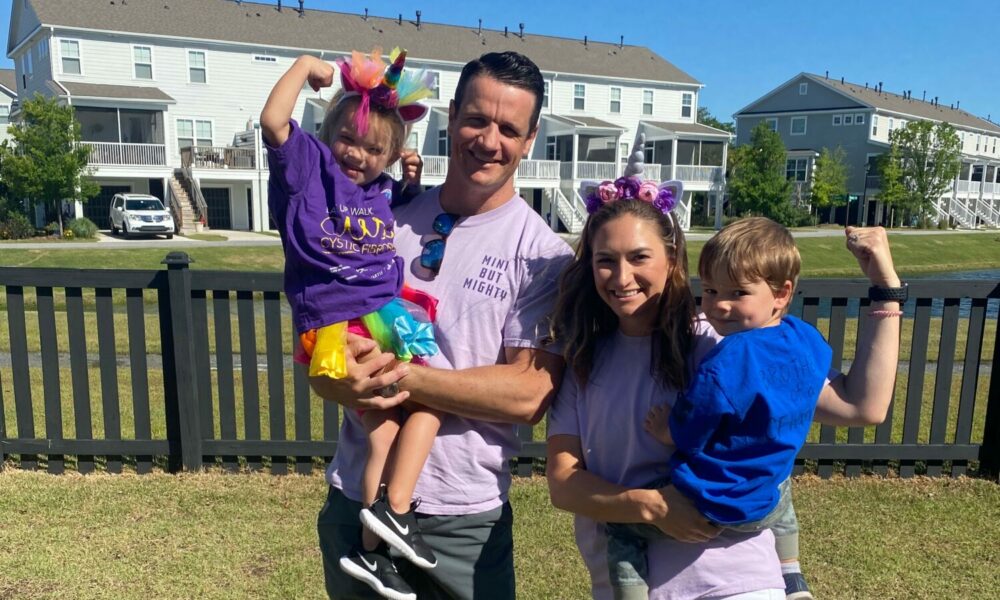 Today we’d like to introduce you to Taylor Lentz.

Hi Taylor, we’d love for you to start by introducing yourself.
My name is Taylor Lentz and our story starts in December of 2020. My daughter Aubin started with a cold and a cough at the beginning of March that just never quite went away. It would be almost gone and then seemed to restart almost.

Being a nurse I knew how to care for all her symptoms and although I was being told that it was asthma or viral illnesses over and over I knew that something wasn’t right. I took her to the pediatrician’s office and to the emergency room many times to get more eyes on her.

I knew something was just not right. Finally after months of her being sick off and on we were seen by a pulmonologist and Aubie and I had prepared ourselves for something like a cancer diagnosis. It was there that she was diagnosed with Cystic Fibrosis.

Cystic Fibrosis is a genetic disorder that affects the lungs, pancreas, and other organs of the body. Until recently it was known as a childhood disease because kids who had it never made it out of elementary school. The Cystic Fibrosis Foundation is a wonderful organization that was started by a group of parents with children with CF in 1955.

Since then they have worked relentlessly in pursuit of treatments and a cure for Cystic Fibrosis. Thanks to the CF Foundation there have been many improvements in treatment including gene-modulating drugs that actually help to fix the genetic mutation that causes CF. These advancements have helped improve the quality of life of people with CF and increase their life expectancy to the mid-50s.

I will not lie and tell you that we got Aubie’s diagnosis and immediately rallied and started raising money and spreading awareness. The first few months are truly a blur. We have amazing family and friends that really surrounded us with love and took care of us.

I remember talking to another Mom at the time that had a child with CF who told me that eventually, I would look at it as a blessing because it would bring so many people and wonderful things into my life. At the time I couldn’t imagine it. I was having a hard time feeling like I would ever feel light and smile again.

About five months after her diagnosis there we decided to do our first Great Strides Walk. We were still in the throngs of the pandemic at this time so we did our own walk in my neighborhood. I posted a few times on Facebook and ended up raising over $26K. Tons of our friends, family, and neighbors came and it was so healing to see all that support.

I also had the opportunity to help another CF Mom in Mount Pleasant with the Mom Prom which also raises money for the CF Foundation. I was able to be the keynote speaker at the event and had such a great experience. After that, I knew that I wanted to do a fundraiser of some sort.

CF Bites came to life over a bottle of wine with my girlfriends. We were trying to brainstorm an event that would be unique and happen year after year. We want this to become an event that everyone looks forward to every year. There will be a costume contest, open bar, full live band, and a silent auction.

It is going to be held at Holy City Brewery in the Porter Room. A small group of Moms in my neighborhood have become my committee and how truly blessed I am to have them! If you ever want something done…. ask a group of Moms!

The CF Foundation is an organization unlike any other. I truly cannot think of a better organization to raise money for. They are there for families every step of the way. I have had the unique experience of experiencing CF from many different perspectives. Before I had children, right after nursing school, I worked on a floor that specialized in Cystic Fibrosis. I had no idea that I was a carrier.

I even went to a few fundraisers for the CF Foundation. Little did I know at the time that it would become such a big part of my life. At the time I was working there, which was less than 10 years ago, there were no medications that actually treated the disease. All treatment was for symptoms and to make patients more comfortable.

The last year I worked there I went to 4 funerals for kids with CF under the age of 18. When Aubie was diagnosed that was the first thing my brain brought back. I had been working in the pediatric ER for the last five years of my career and had not taken care of anyone with CF in all those years.

The whole world of CF had changed in that short amount of time. We are truly in the middle of making history with the new first-of-their-kind medications that help to correct the genetic mutations of CF. The CF Foundation also is one of the first non-profits to invest their money in other companies that are working towards technologies that could help find a cure.

CF is a complex and rare disease that does not get any outside funding. The CF Foundation is 100% funded by donations, which makes fundraisers like mine so important. Education and awareness is a big hurdle to fundraising I think because a lot of the time these kids look completely normal.

I can’t tell you how many times people are shocked when I tell them that Aubie has CF. It can feel like an invisible disease although she spends an hour a day in a vibrating vest before school and takes over 20 enzyme pills, and many additional medications a day to keep her disease at bay.

I think it is important and incredibly exciting and such a great opportunity for people to learn about what is happening with CF right now. Our supporters have a chance to really become part of funding history in the making. What other cause can you think of that has gone from practically no chance of making it to middle school to now more than double the life expectancy in a few years’ time?

Not to mention the truly first-of-its-kind gene-correcting drugs? This technology will not only continue to further advancements with CF but also for other genetic illnesses. The CF Foundation and Aubie’s providers tell me that they would not be surprised if there was a cure found within her lifetime. The research that still needs to be done is genetic-based and incredibly expensive.

With my background and knowledge of how far all of this has come, I feel compelled to tell my story. Although this whole process has shattered my heart, I do also feel that it has broken it open. I feel a lot more, some days we have to take it day by day but I do feel moments of lightness knowing that I am giving it my all to find Aubie a cure.

Can you talk to us a bit about the challenges and lessons you’ve learned along the way? Looking back would you say it’s been easy or smooth in retrospect?
I explained a little in the last question but no it hasn’t. I have had to really work on my mental health and being healthy for Aubie. At the time of diagnosis, I was really struggling with some PTSD of what I knew of CF. But I am a big advocate of mental health and am very blessed to have an amazing husband who helped a ton during that time.

And as I spoke before I have a wonderful group of friends. Friends who jumped all in and learned about CF and what Aubie needed. They learned her medications, and what she needed to stay away from and are vigilant about keeping away if one of their kids is sick. This day-to-day type of support is hard to put into words how comforting it is.

I also have family that jumped in and helped us get back to our new normal after her diagnosis. My Mom did my laundry for months. I would put it on my porch and she would pick it up and it would be done and folded on my doorstep by morning.

We also had the challenge of getting Aubie healthy. At diagnosis, she was underweight and needed to be treated for an infection. She started on her vest the day she was diagnosed and started a nebulizer. For the first full year, she was on a nebulizer that added another hour of treatment in addition to the hour she already did.

She spent two full hours a day with a mask on her face and in her vibrating vest. We started her enzyme pills which help her digest protein and fat so her body is able to use them. We worked really hard to get her to the 50th percentile in weight, which is very linked to better outcomes of CF. In the first year after diagnosis Aubie gained 13 pounds.

We fought for every single one of those pounds! We also really made a point to teach and work with Aubie to understand what she was doing and why. She will always have CF, so it is important to me for her to be responsible in an age-appropriate way. It hasn’t always been easy but she is doing wonderful in her first year of kindergarten so far!

Can you tell our readers more about what you do and what you think sets you apart from others?
I am a nurse by trade but now stay at home to take care of Aubin and my son Boone. The fundraiser CF Bites is now my work! I think my background is what sets me apart. I am not only passionate about this because it affects my daughter but I have seen how far we have come in a short amount of time and it is nothing short of amazing.

What do you like and dislike about the city?
What I like best about our city is that although it is a fairly big city it feels small. People love to support locals and from my experience love to help in any way they can. Every time people say yes to helping a little piece of my heart feels like it is reinforced and I stand a bit taller.

There is so much happening here that I worry that I will not get the word out. It’s a blessing and a curse to be part of such a social and exciting place! 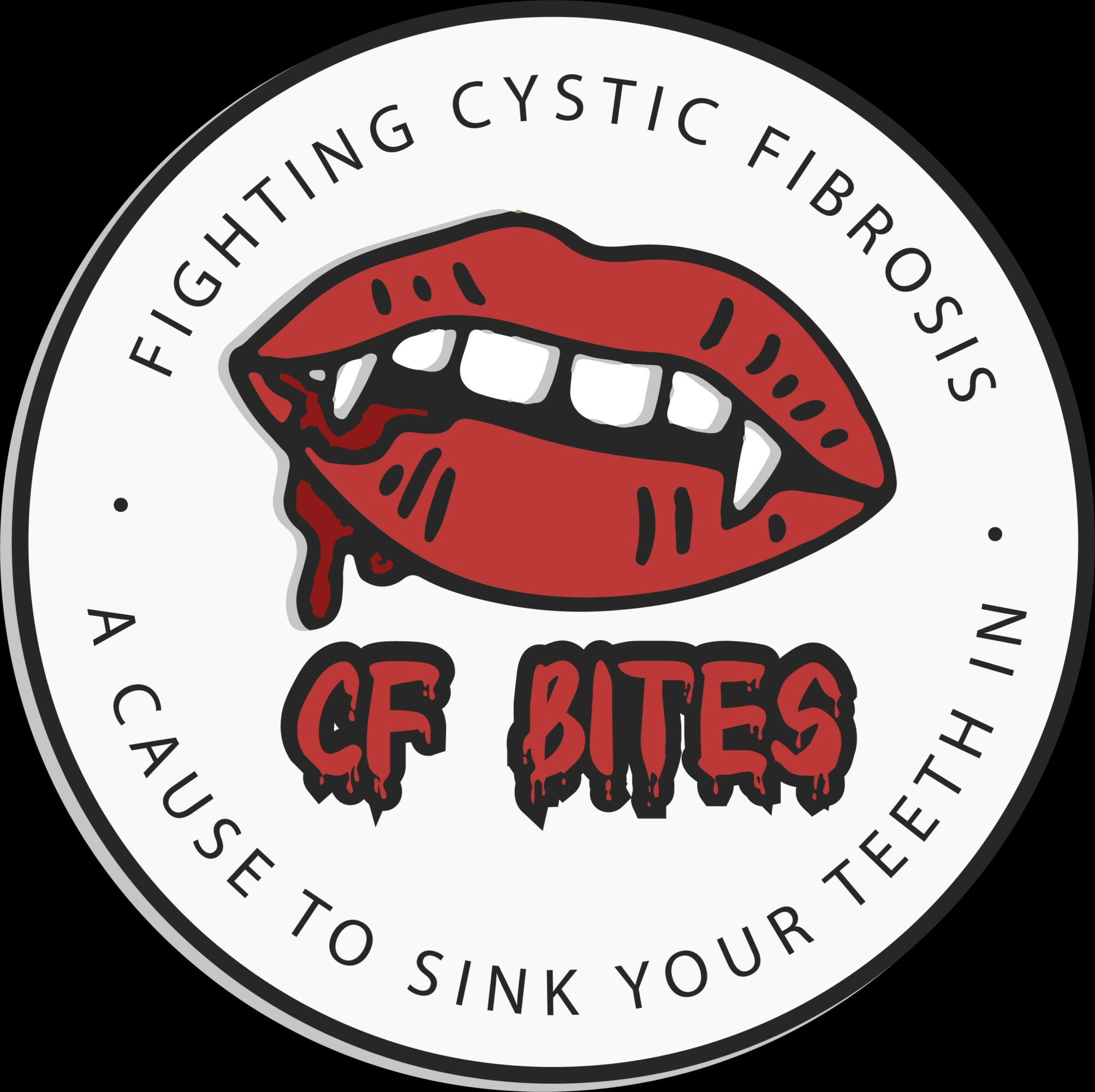 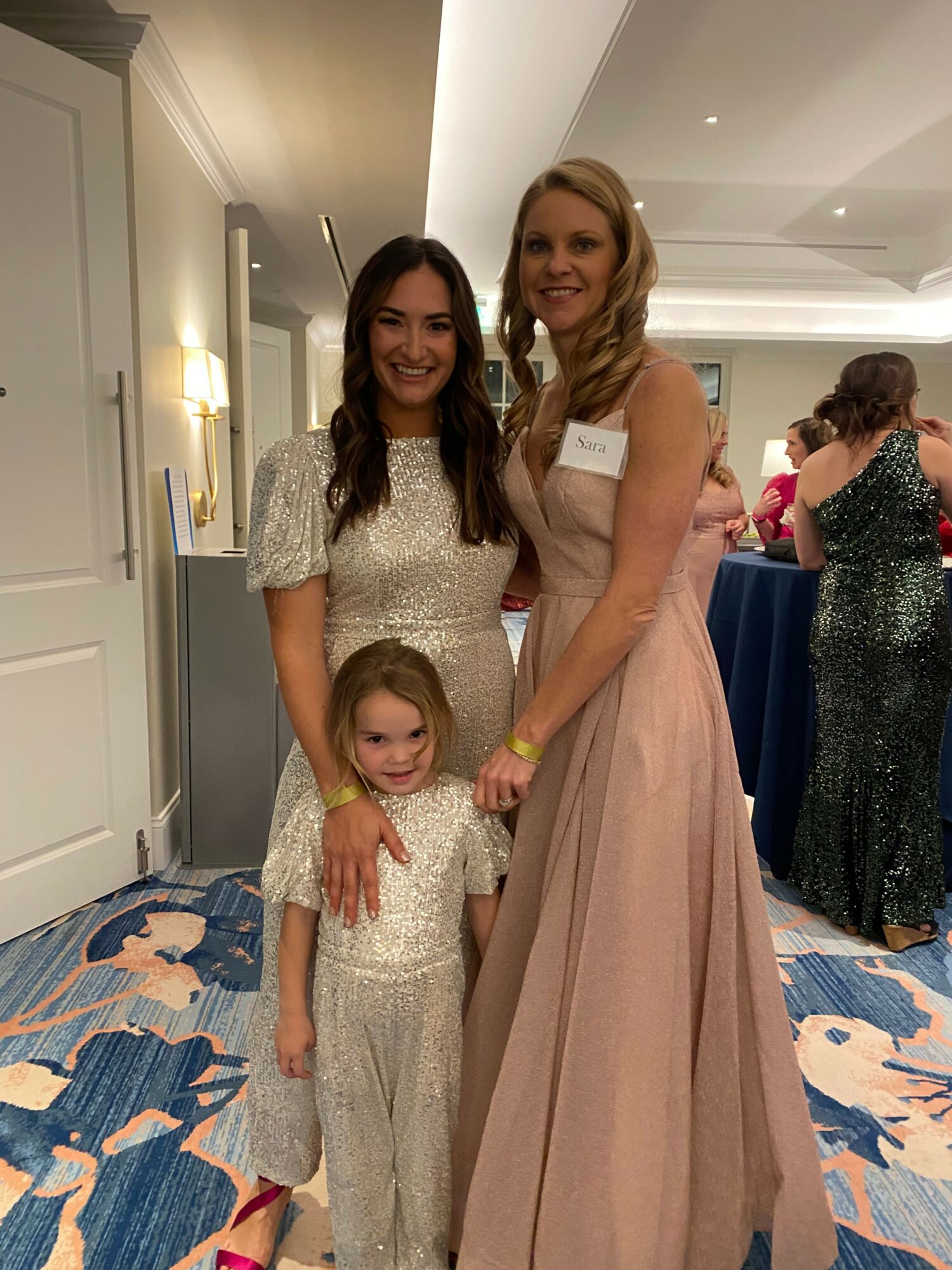 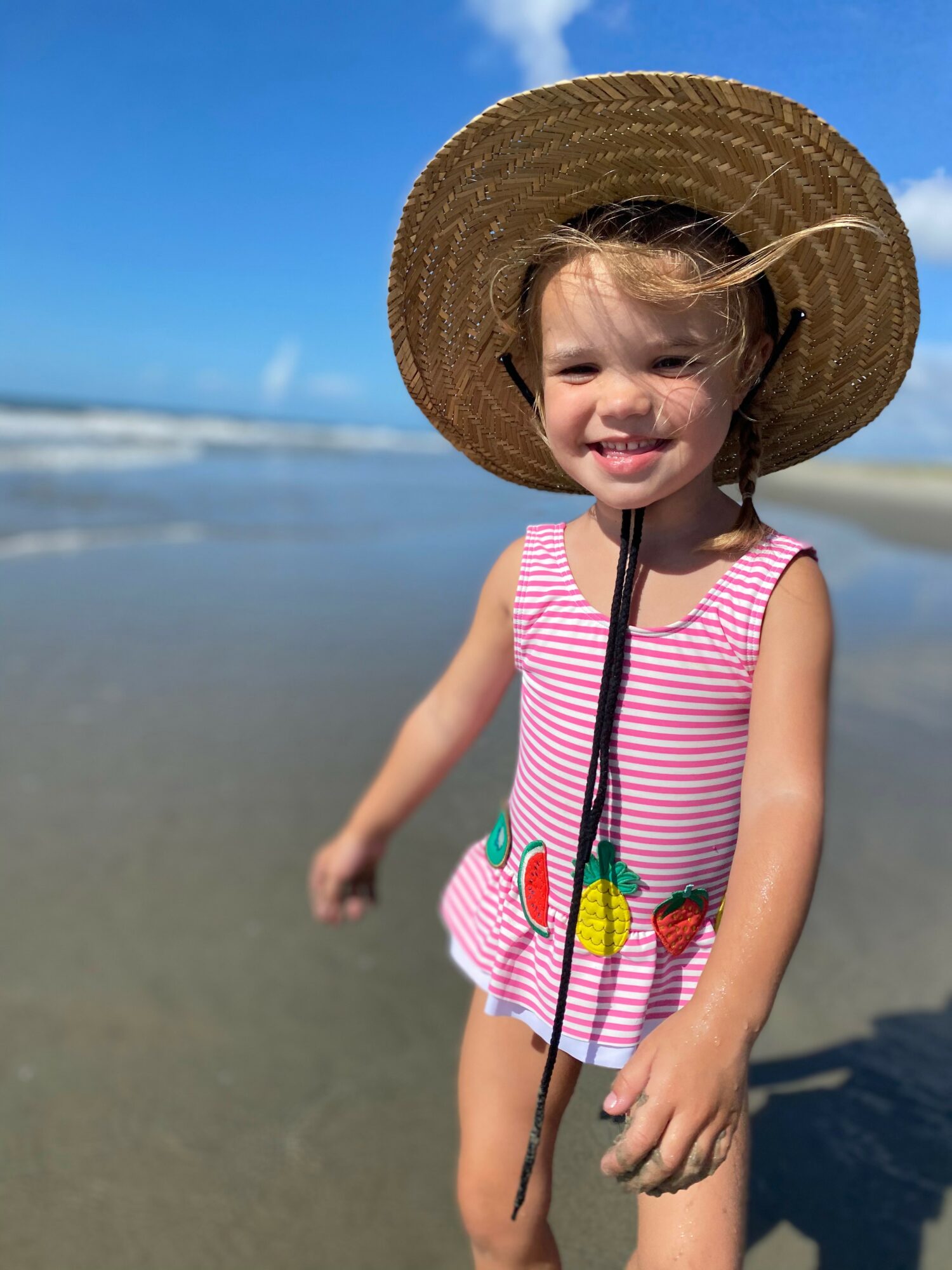 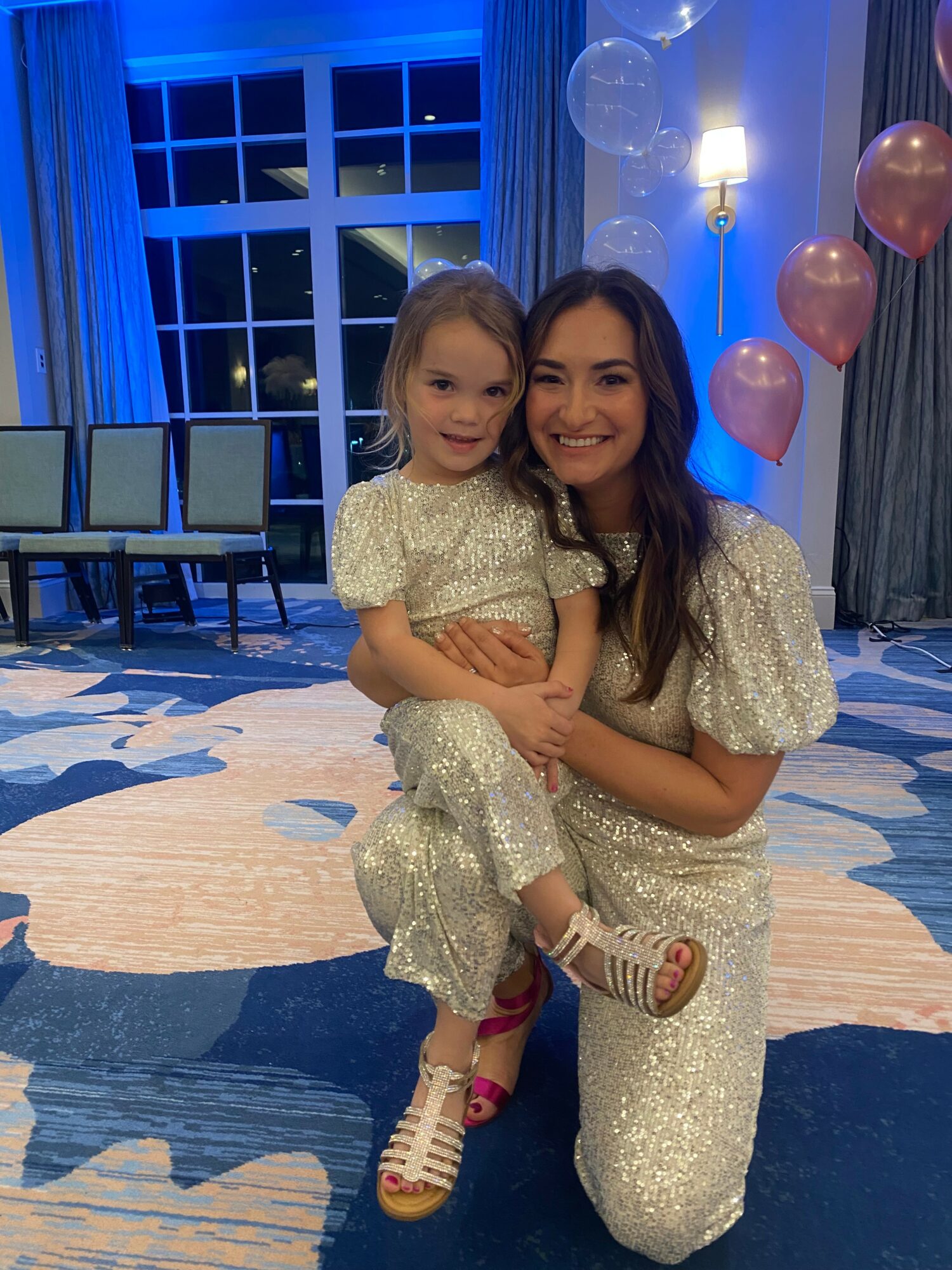 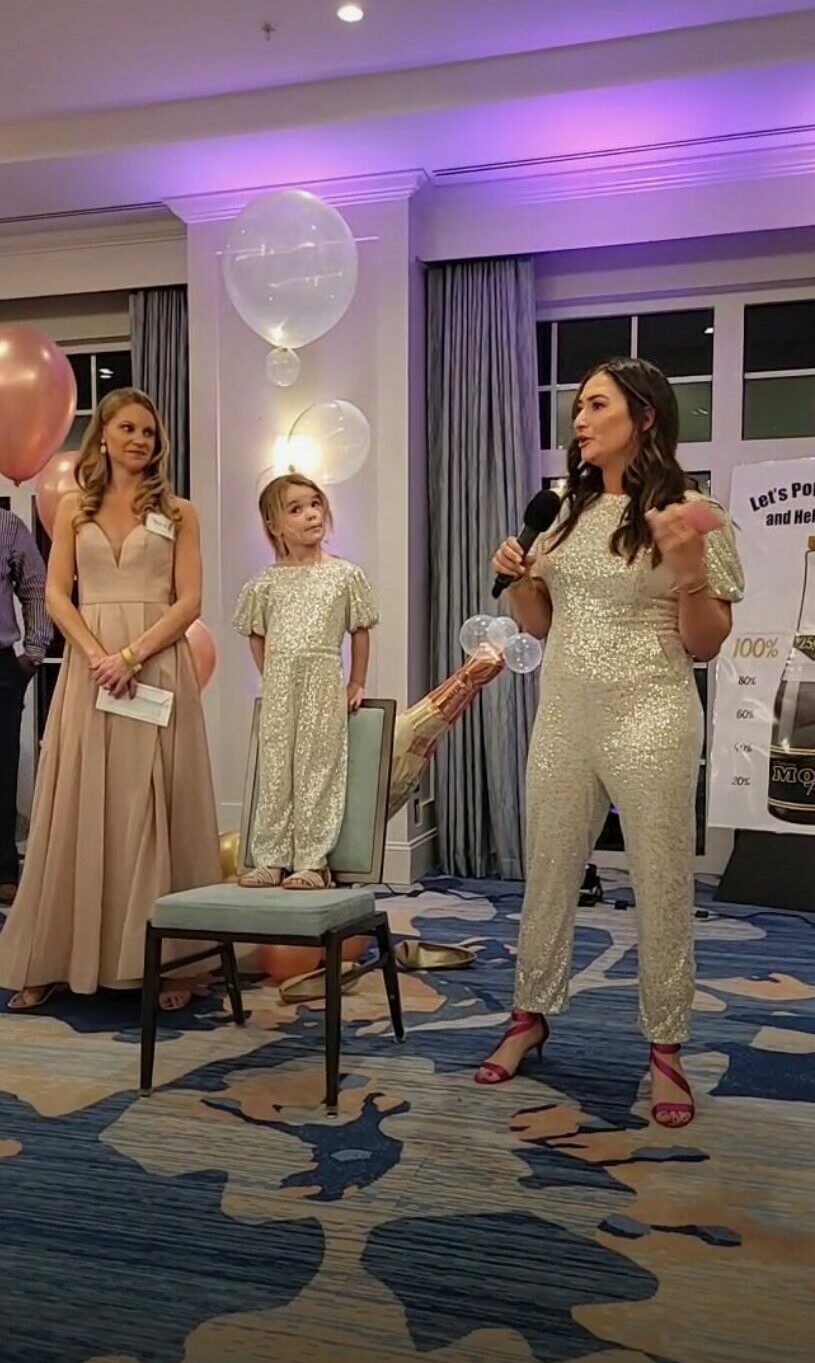 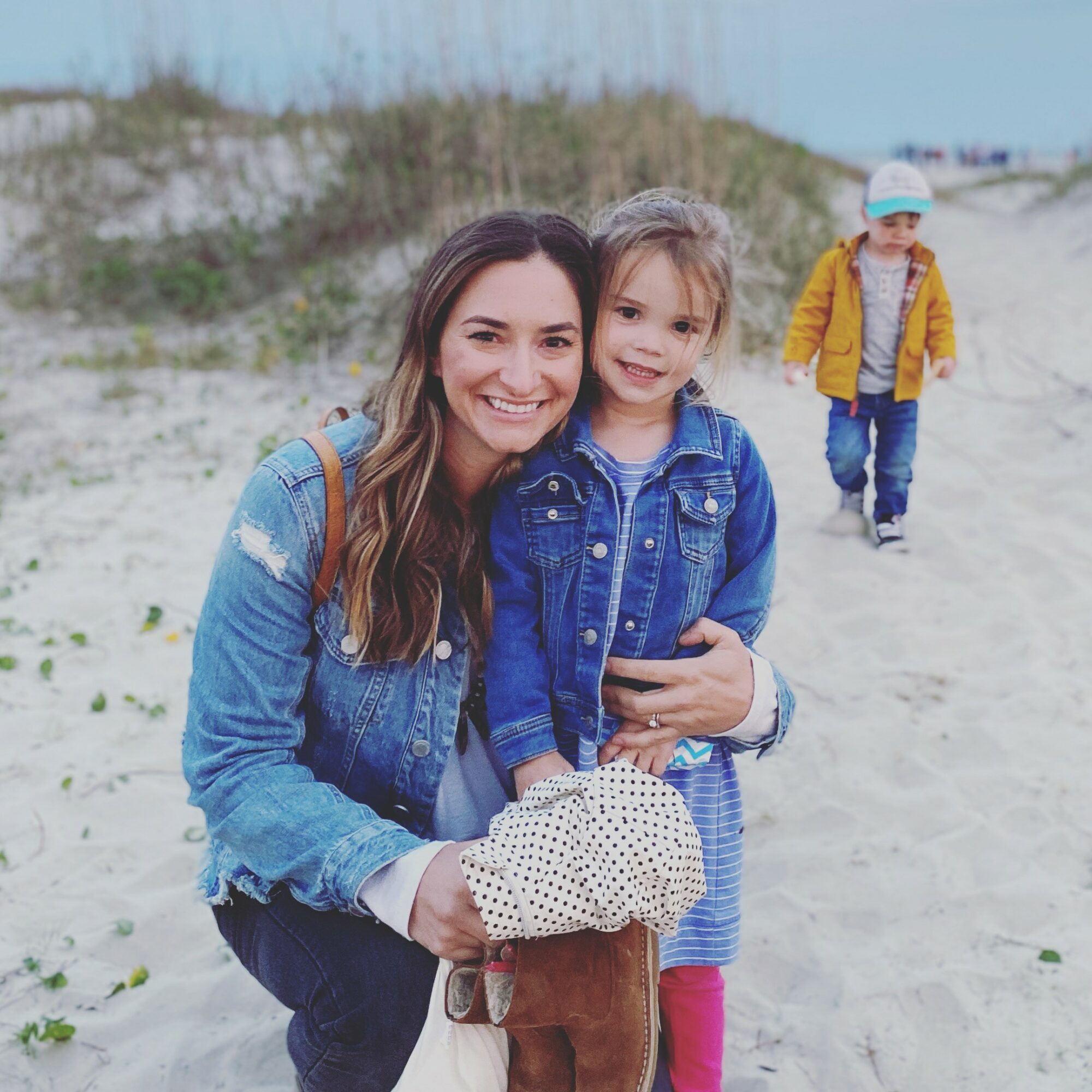 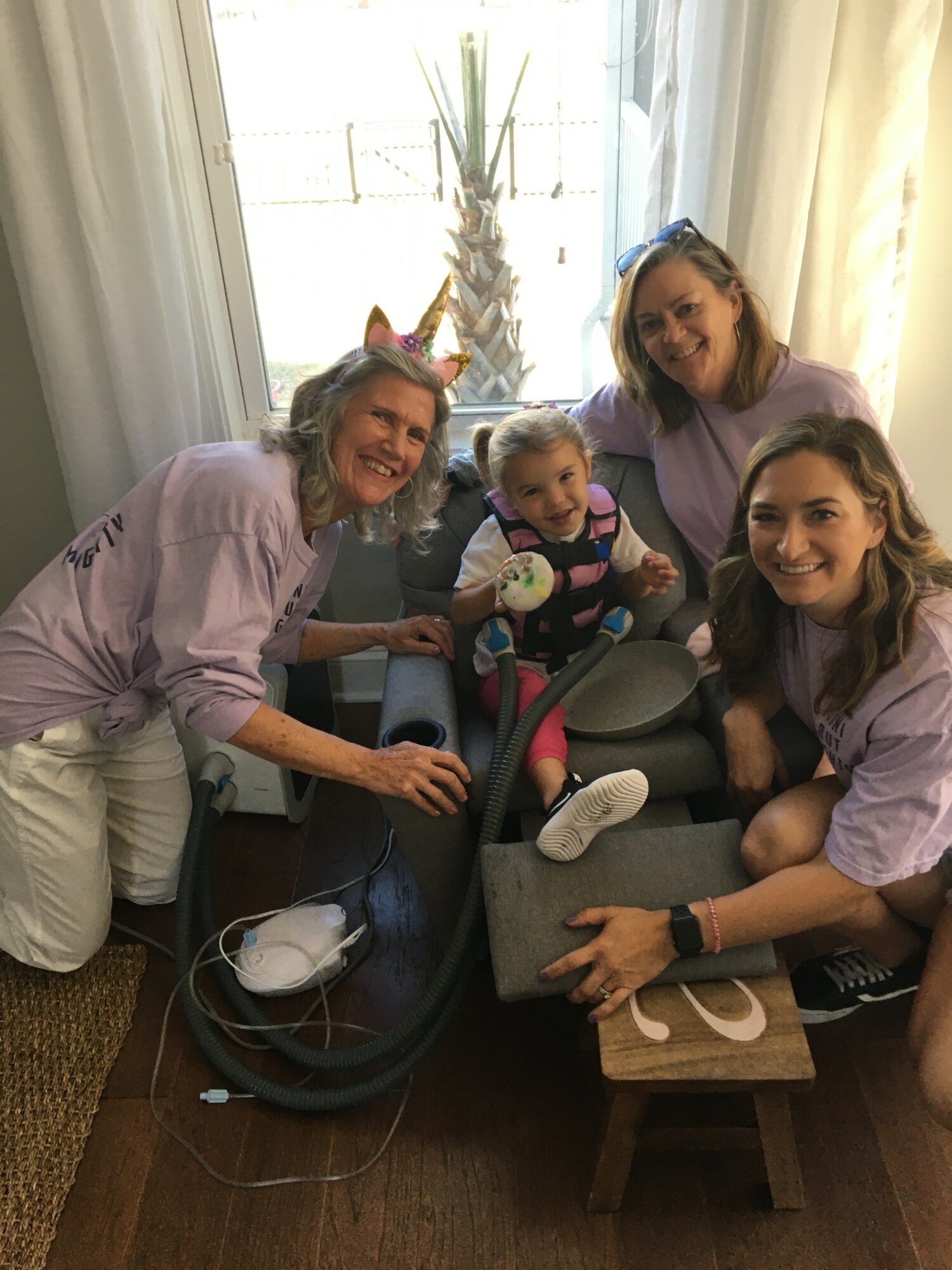 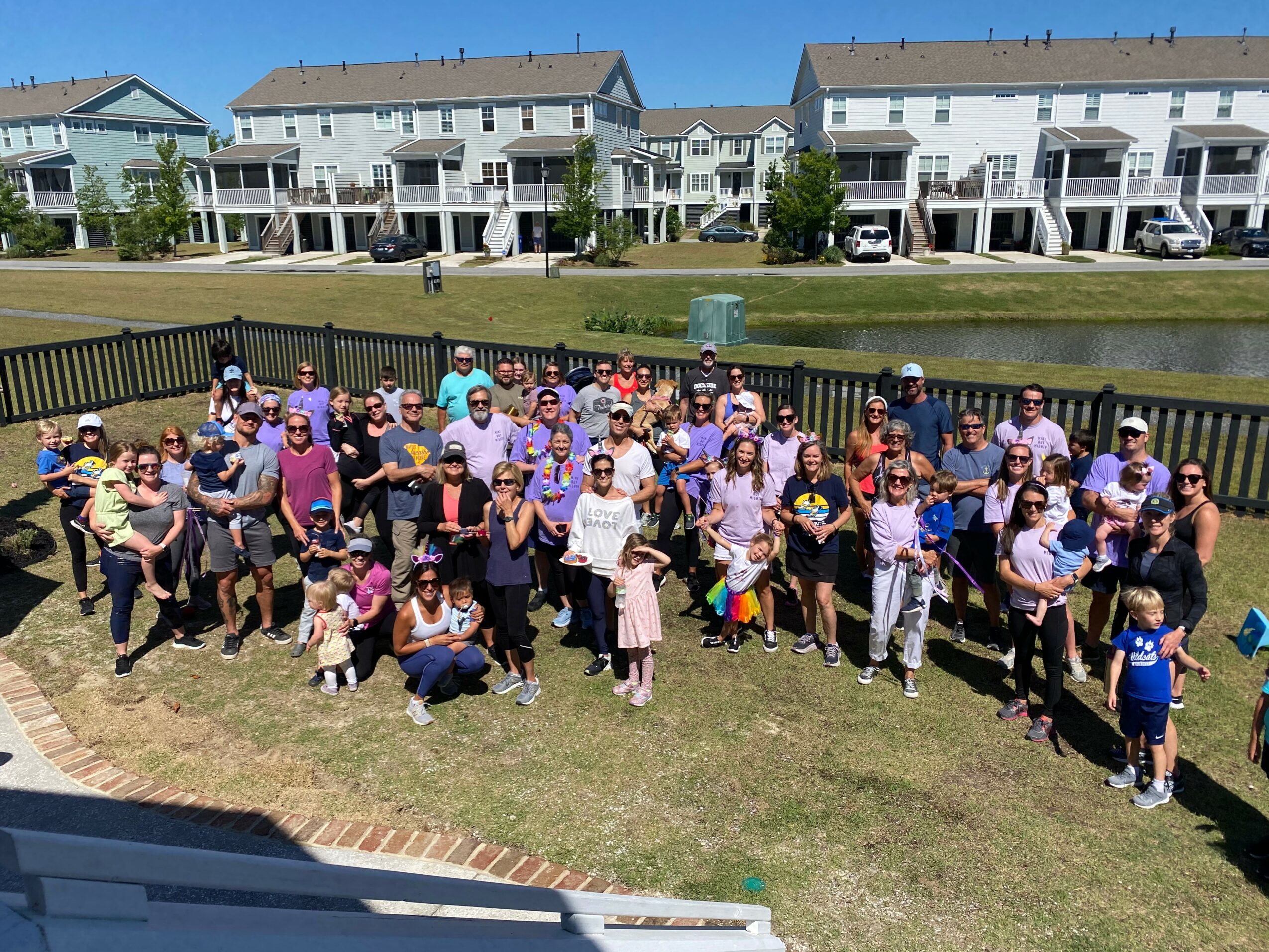 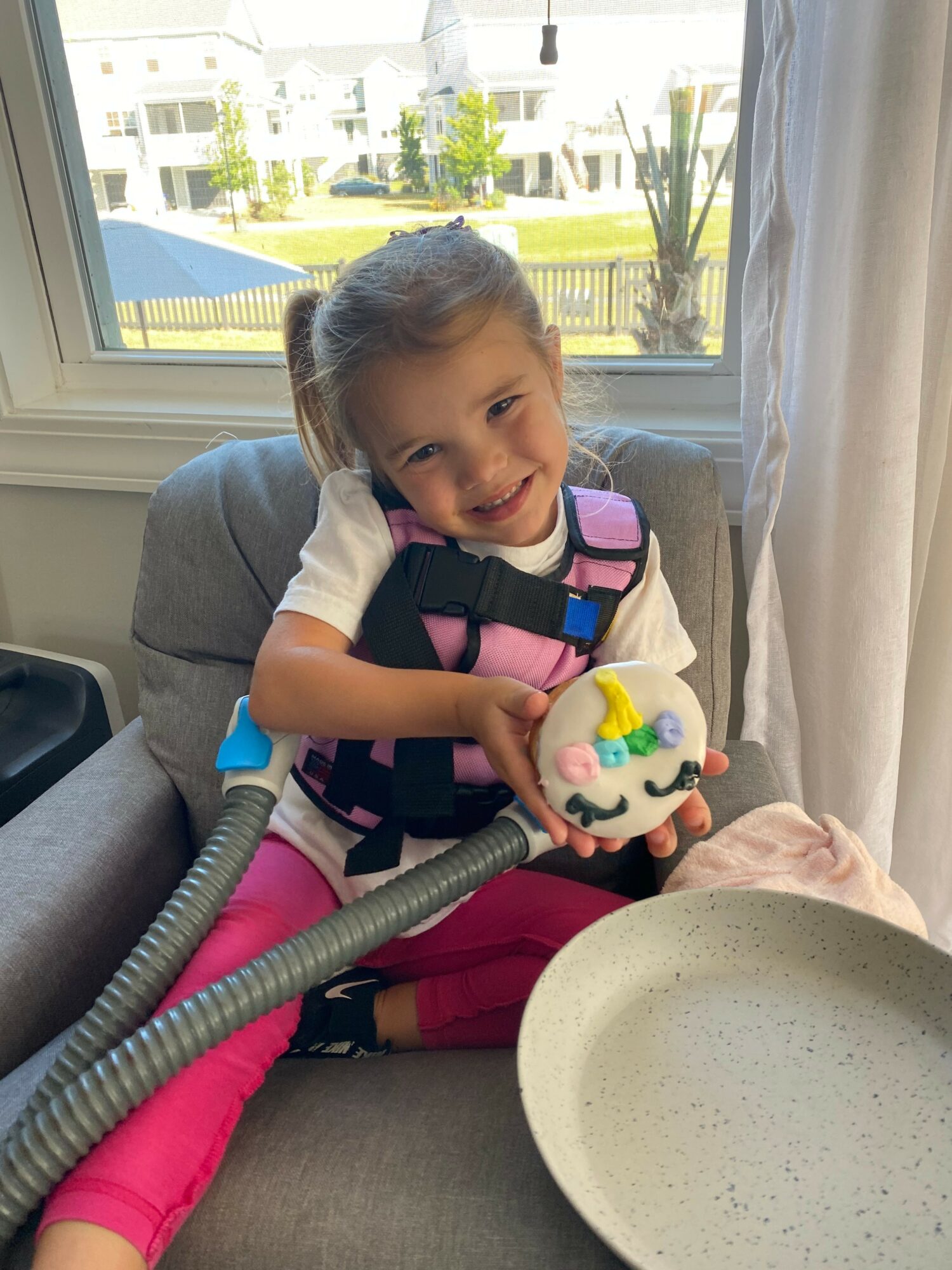 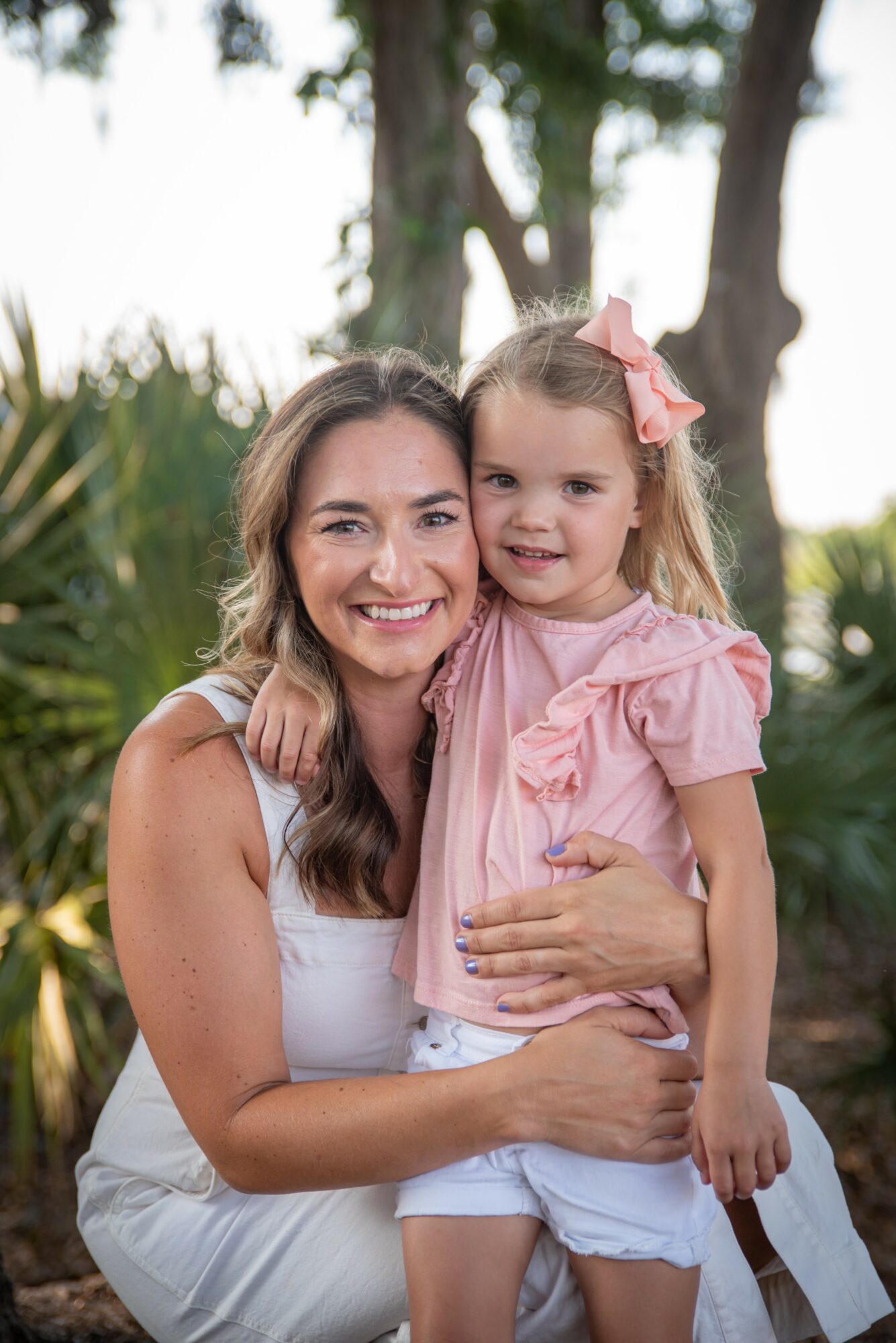