Inspiring Conversations with Rev. Hillary Taylor of South Carolinians for Alternatives to the Death Penalty 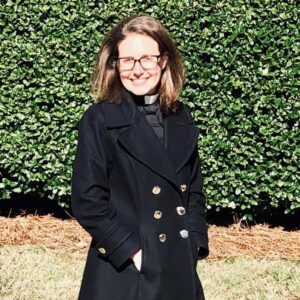 Today we’d like to introduce you to Rev. Hillary Taylor.

Hi Rev. Hillary, can you start by introducing yourself? We’d love to learn more about how you got to where you are today.
I come to anti-death penalty activism from the perspective of a faith leader. I am an ordained United Methodist minister, and United Methodists have a longstanding opposition to the death penalty in our Book of Discipline.

My faith tells me that nobody is beyond redemption, and we are more than the worst thing we have ever done. My curiosity about anti-death penalty work started in college when my friend Courtney (the present of Furman University’s NAACP chapter at the time) asked me to be part of a vigil for Troy Davis.

It was the first time I ever thought about how arbitrarily the death penalty could be sentenced, especially when there was little to no evidence. It was also the first time I was confronted with the fact that the death penalty is disproportionately given to poor people, people of color, people who have terrible representation in the trial, people with persistent mental illnesses, and people whose trauma is otherwise ignored by social safety nets.

My interest in anti-death penalty work reignited seven years ago when Kelly Gissendaner was on Death Watch. Kelly was a woman sentenced to capital punishment for “conspiring to kill her husband” (which is not a murder charge). During the 18 years that Kelly was incarcerated, she became a force for hope and change at Lee Arrendale State Prison (where she was incarcerated).

But despite all the ways she changed for the better, despite the fact that she would counsel suicidal people in the prison through the vents of her cell, despite recommendations from people connected to the Georgia Department of Corrections to grant her clemency, despite her children’s desire for her to stay alive, the Georgia Board of Pardons and Paroles decided to execute her anyway.

I was in seminary when Kelly was executed, and I knew people who were very connected to Kelly. I was active in planning vigils and direct actions for her clemency campaign, and other cases that followed. So when I graduated from seminary and came back to South Carolina to become a pastor, I knew I wanted to abolish the death penalty in South Carolina.

I connected with Justice 360 (the law firm representing most of the men on SC’s death row) and became a pen pal to one of their clients. That relationship continues to this day and is one of my most important friendships. My connection to SC’s death row connected me to other activists for the relaunching of SCADP. After the group reformed, I became the interim convener in July 2021 and now work as the full-time Interim Executive Director.

Can you talk to us a bit about the challenges and lessons you’ve learned along the way? Looking back would you say it’s been easy or smooth in retrospect?
For the last year, I worked another job full-time in addition to being the Interim Convener for SCADP. We needed to update a lot of our administrative scaffolding from the previous decade, which proved to be time-consuming.

On top of that, we had to be prepared in case execution was announced. We knew the Department of Corrections was in the process of renovating the death chamber for the use of a firing squad, but we didn’t know when it would be finished.

Anti-death penalty work can feel like an “all or nothing” experience: one minute, you’re updating your website, the next minute, the Department of Correction has scheduled an execution four weeks away and there are a lot of plans to make, and people to call. It was hard doing both jobs at once, but we needed to reach a critical mass of funding before we hired anyone full-time.

I’m grateful for the persistence of our formation team members and the ways they helped us apply for funding (especially the Death Penalty Action and the Christian Action Council). It’s allowed us to hire a full-time community organizer, Meredith Matthews, and myself.

Great, so let’s talk business. Can you tell our readers more about what you do and what you think sets you apart from others?
The mission of South Carolinians for Alternatives to the Death Penalty (SCADP) is to abolish the Death Penalty in South Carolina and catalyze criminal justice reform through public advocacy, grassroots organizing, and community mobilization.

SCADP relaunched in 2021 with a new name (South Carolinians for Alternatives to the Death Penalty) as SC Senate Bill 200 passed the South Carolina General Assembly. SC Senate Bill 200 expedited the timeline of executions by forcing death row residents to choose between a firing squad or the electric chair if lethal injection was not an available form for execution.

Two men, Brad Sigmon and Freddie Owens were scheduled to be executed just as the law was passed. However, the executions were stayed, as there was no firing squad mechanism for death row residents in South Carolina. At present, SCADP is the premiere voice against the death penalty in the state, and we are proud to represent a diverse coalition of voices (in terms of age, ethnicity, geography, faith background, etc.).

Abolishing the death penalty is also tied to anti-racism work, violence prevention, poverty alleviation, and promoting restorative justice (compared to our present criminal punishment system). Our intersectionality sets us apart from other organizations. This is the aspect of our work of which we are most proud, and we look forward to building more relationships with new coalition partners this year.

On a day-to-day basis (that is when we are not hosting rallies or press conferences to stop executions), SCADP hosts programming to educate people about South Carolina’s capital punishment system. This year, we hope to double our coalition by reaching out to university student groups, faith-based organizations, and more SC legislators.

Every 4th Thursday of the month, we host a virtual book club featuring voices against the death penalty. And several months ago, we launched a pen-pal program for those on Death Row (check it out at https://www.scadp.org/rehumanize). From October 21-23, 2022, we will be embarking on a “Journey of Hope” pilgrimage.

What was your favorite childhood memory?
That’s a tough one. I have several good memories of making things with my dad. He was always the person with whom I did my school projects (e.g., dioramas of the Midwest prairie, a life-sized plywood cutout of an ocelot). I’m not much of a drawer or a painter, but I loved building new things with him… especially if it was carpentry related.

I’d like to think this is where my love for construction-based mission projects came from. I’m at a place in life where I want to build up more than I want to tear down, which is a helpful ethic for the work I do now. 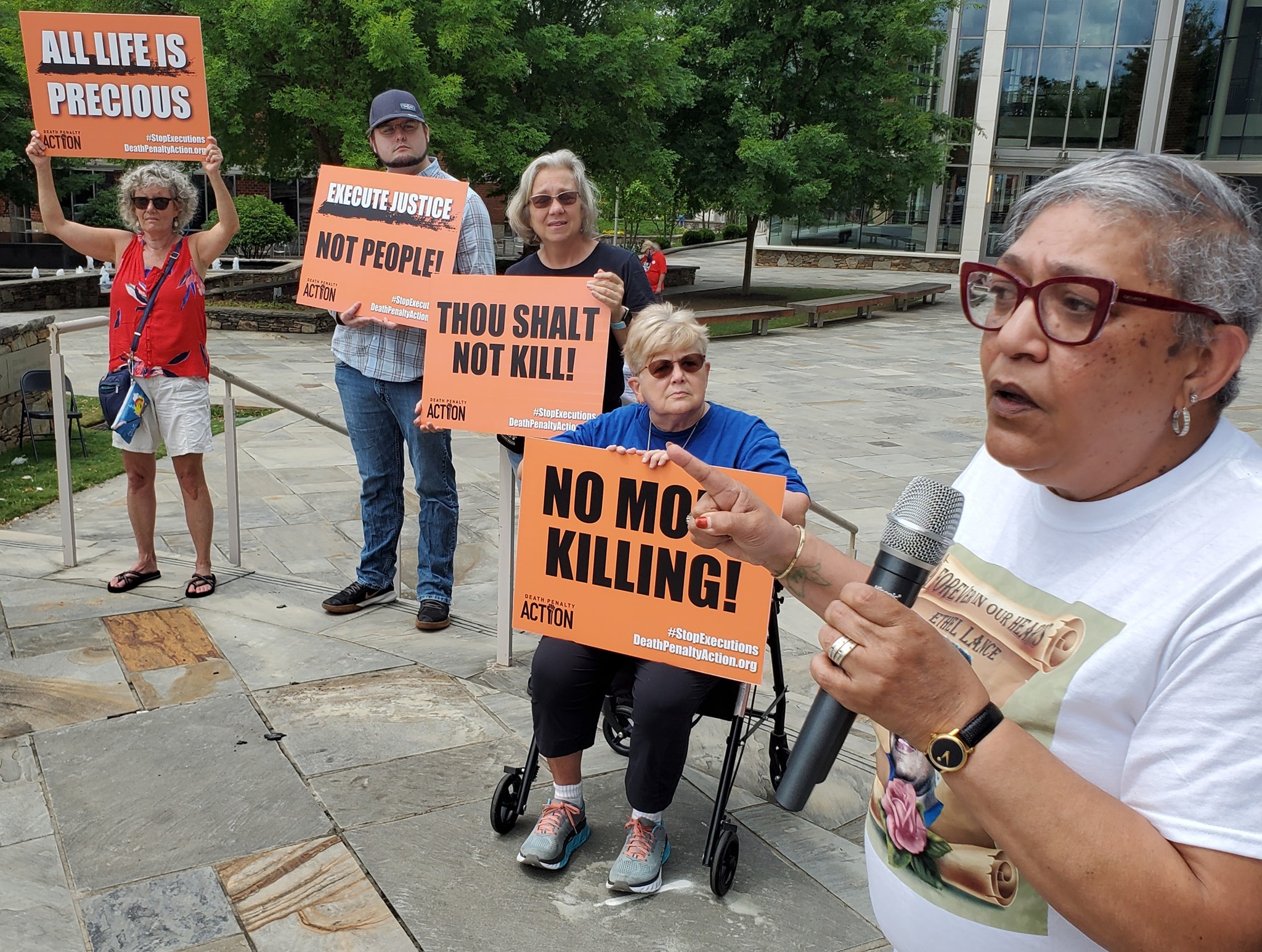 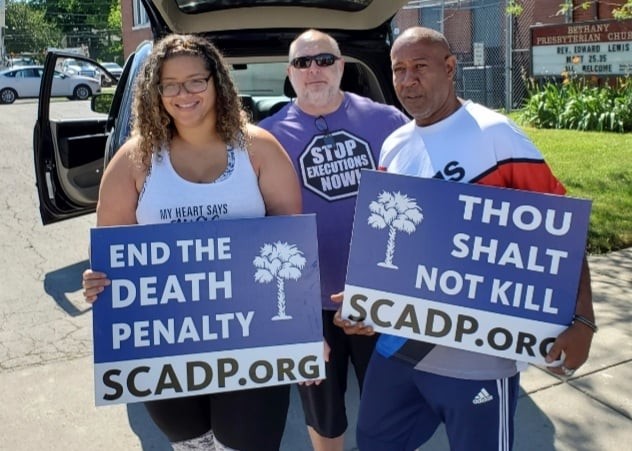 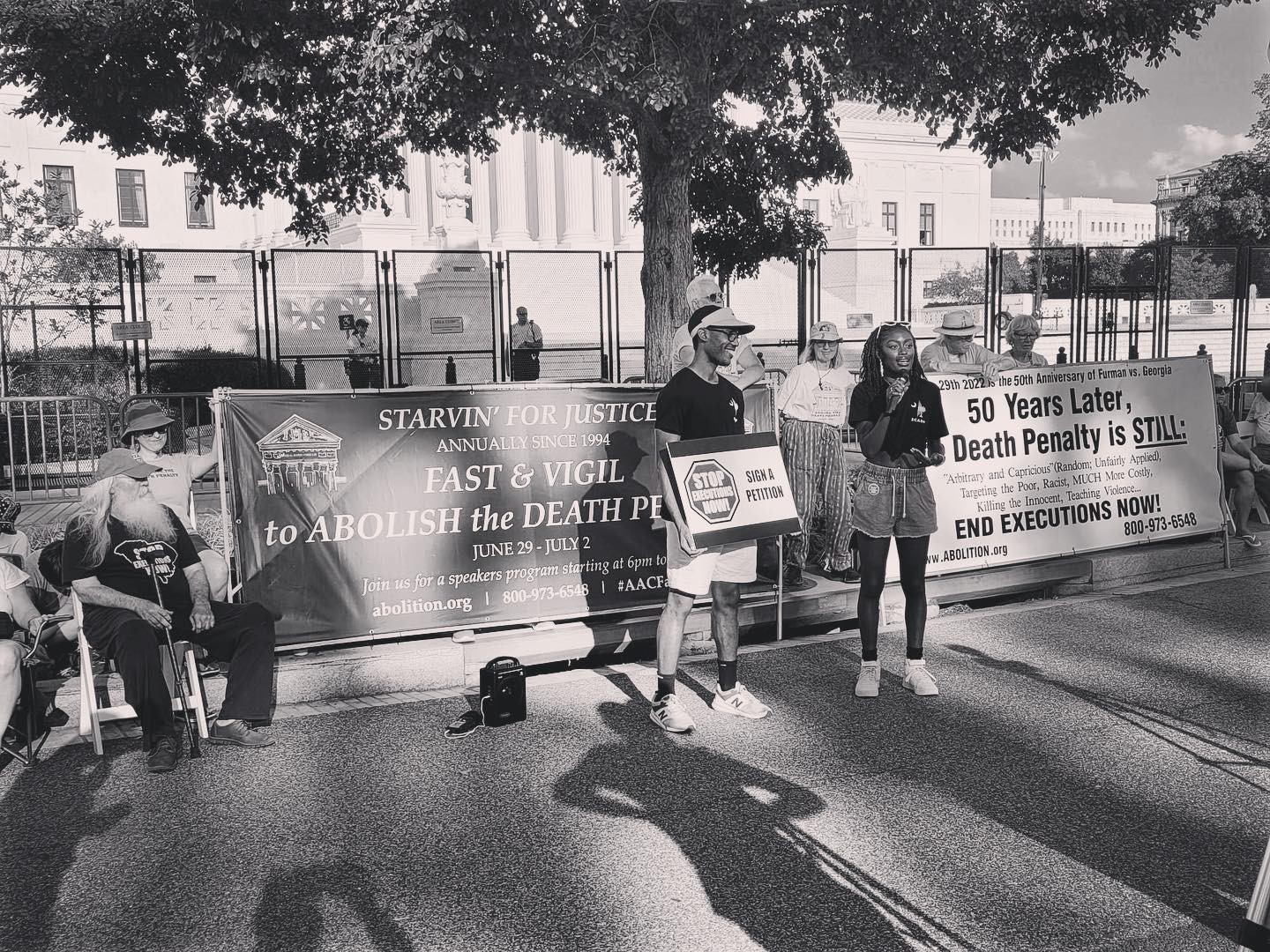 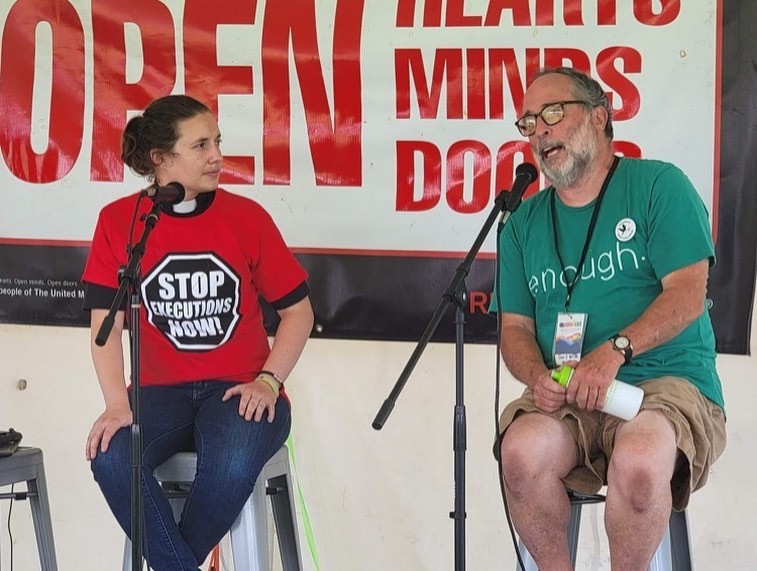 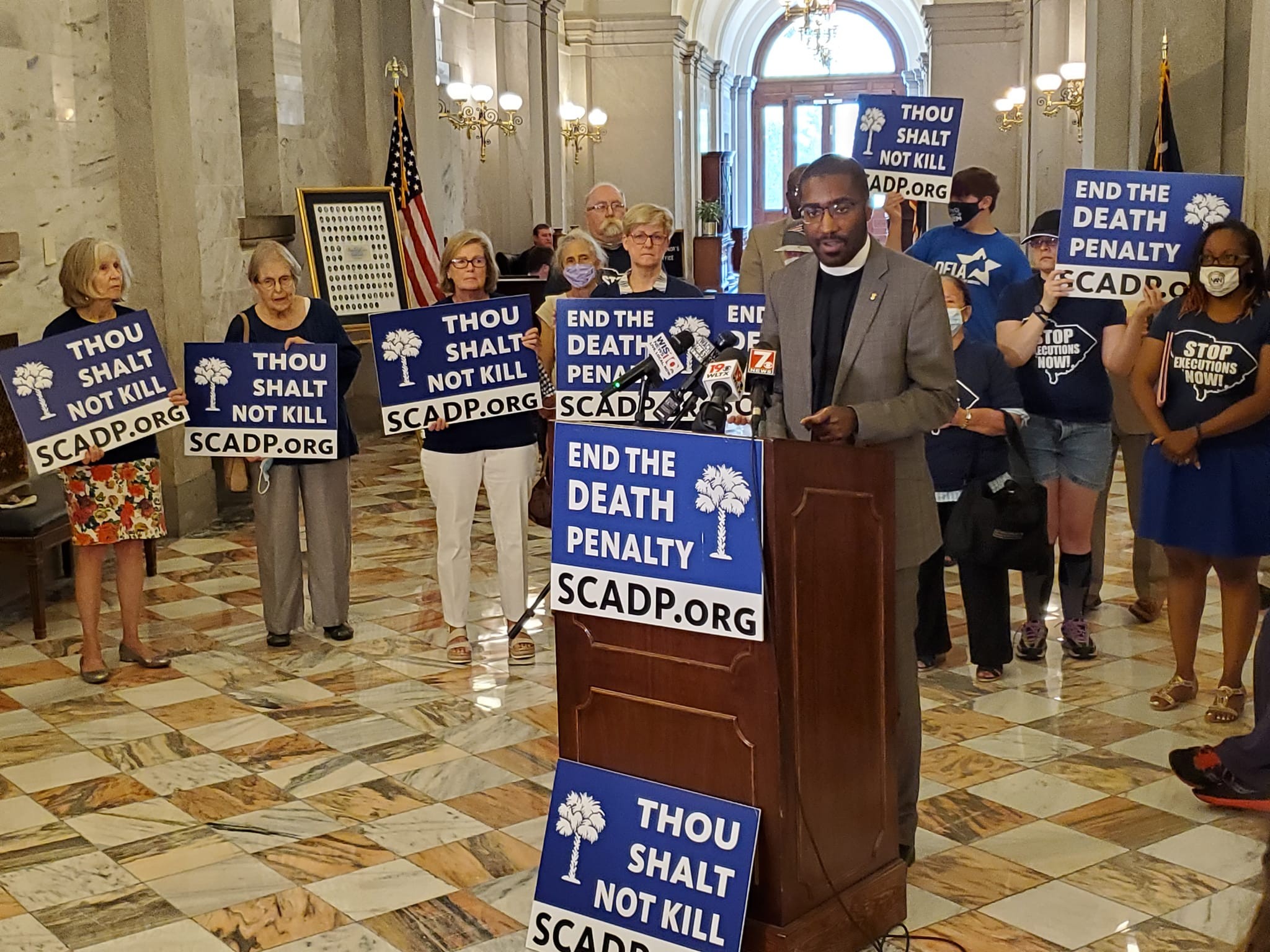 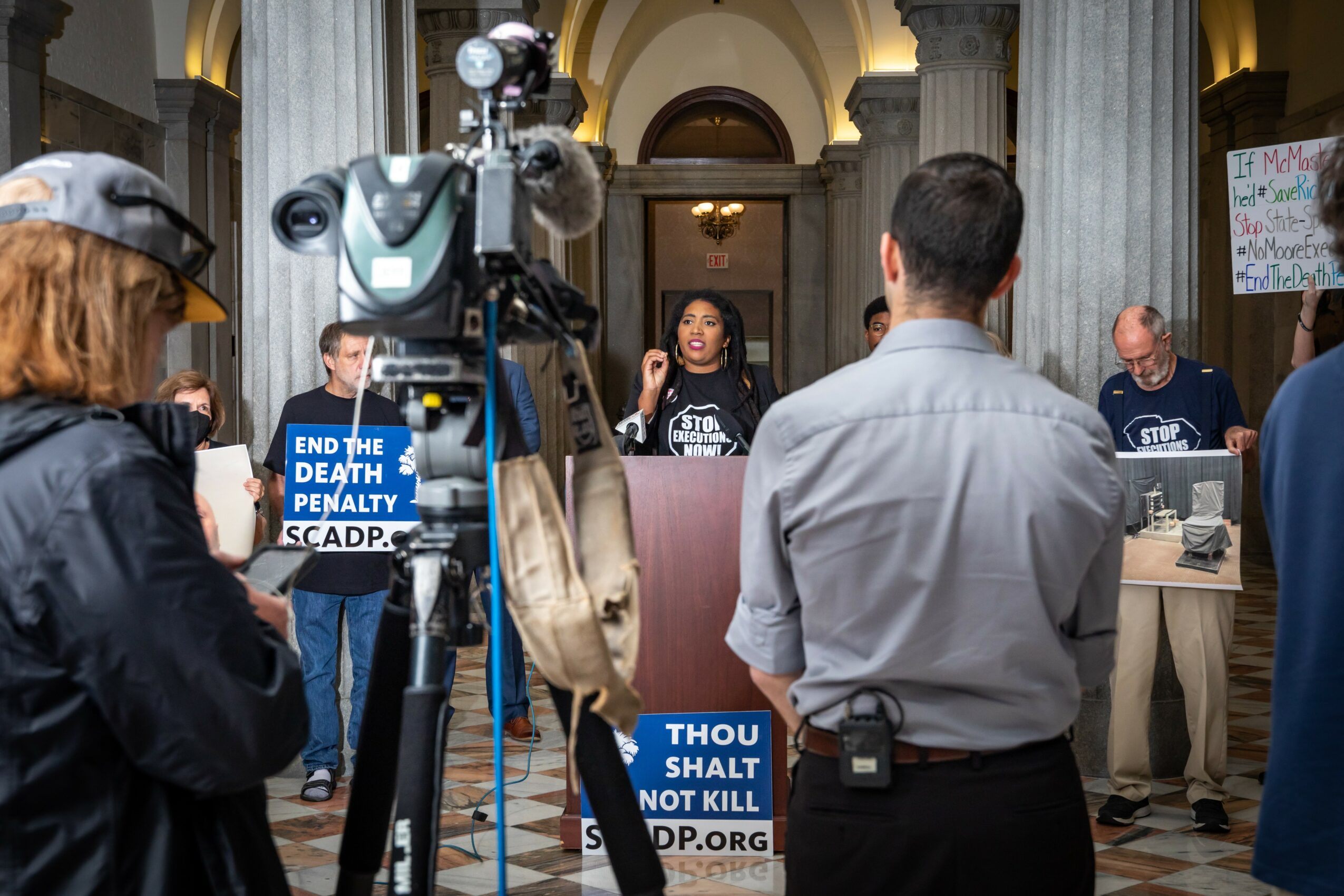